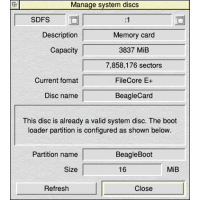 SystemDisc is the second of the family of DiscTools to be released by Piccolo Systems, and is a general-purpose tool for managing the system software on modern RISC OS systems. The benefits of using SystemDisc over the pre-existing solutions include:

Modern RISC OS systems, such as the Beagleboard, Pandaboard or Raspberry Pi, feature a built-in SD or micro SD card reader. You need to have a memory card inserted into this slot when you power up the board, because their CPUs expect to read files (often known as firmware or bootloaders) from which will in turn load RISC OS itself. These expect the SD card to be formatted with a FAT format - a format whose roots can be traced to MS-DOS or even earlier.

SystemDisc is a flexible tool for creating and working with these dual-format media. With SystemDisc, you can:

The current version is 1.04. This item is delivered by email and requires RISC OS 5.